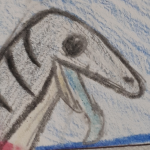 Hey friend, I'm Solstice, a professional weirdo and stalker. I like video games, reading, writing and drawing. I write stuff in all different genres (Fantasy, Sci-Fi, you name it!) yee. (My profile such a mess, I’m sorry).

These are all the stories I’m currently working on and/or finished.

Legend of the Sundancer - This was the first ever story I wrote on the wiki. It’s gone through a lot of changes since then. It depicts the journey of an elf and a girl, torn between lands.

Out of the Closet - This was the first story I’ve ever completed (and so far the only full one) on the wiki. It tells of the stories of three LGBT+ students and their struggles.

The Silver Hourglass - Currently it is the only poem I’ve written so far. A boy runs from death, but in the end death always wins.

Ace - This story depicts the long, harrowing journey from street thief to crimelord.

Distant - War of Aeternitas - This tells the tale of three humans and struggle to survive on an alien world, where a war rages on...

Nature’s Resilience - A short story about Nature’s adaptability and how it thrives in even the toughest conditions. It was also partly inspired by the Chernobyl Disaster.

Wolfsbane - My first collab with Night!

Realms Colliding - The page version of the Build Your Own Story thread, with Indigo, Enderfire and Night.

These are a few of the stories that I don't plan on working on any longer. This may change but I severely doubt it.

Finally I have one thanks to the wonderful Enderfire!

If you received this, it means Solstice Writings/Solstice considers you as a friend! Usually via suffering listening to them need about D&D for hours on end, reading their stories or just being a cool person in general!

If you have received this badge, type {{Solstice's Fren}} in the source code.

Hello! If you have received this badge, you have been selected as a friend by Enderfiretheanimusdragon, aka Enderfire. This means that you have a 50% less chance of being attacked by random Naganadel (check out my prof pic) and/or the Ender Dragon. This also means that you have a 100% more chance of getting nerded at for hours. Just warning you! Anyway, you now have a (possibly draconic?) guard with a Naganadel to answer to behind her.

If you have received this badge, type {{EnderClan}} in the source code.

Hello! If you own this badge, this means you are a proud food lover who enjoys any types of foods! Put it on your profile with pride, and go eat a cookie!

To put this badge on your page, type {{Food Lover}} in the source code.

This badge is for fans of Solstice's story, Out Of The Closet and their burning passion for one of the antagonists, Victoria Harlow.

Retrieved from "https://authors-academy.fandom.com/wiki/User:Solstice_Writings?oldid=70108"
Community content is available under CC-BY-SA unless otherwise noted.