Note: This a Hub of Stories I make in my story universe on the moon of Titan, a Moon of Saturn.

All of them are based after 2050, when it was partly terraformed by Ultra Co., Space X, & The CSA

Another Note: All of this is fictional.

This story is PG-13. Material may be quite a bit graphic, but we should all be 13 here, so it shouldn't matter that much. Still, younger users should know their limits. There may be blood, death, or mature themes.

I hate speeches. But I hate Logan R. Maxwell much more. How'd this guy even become the Prime Minister of The Titan United Democratic Republic?

3 weeks of Outpost Tango. That's how long you lasted here. 3 Weeks of Pure Anarchy. 3 Weeks of endless warfare. And to think, you, John R. Simon, survived though the Super-Soldier Program, and get to tell your story though the master computer.

The Legion attacked daily. You fought them daily, yet Bravely

It had only been a single month since we had been informed of Earth's downfall. Only 3 Months since they had been overrun, and Titan had already broke to chaos. The only pre-break power left was the Titan United Democratic Republic (The TUDR), of which I, Justin F. Grayhorse, am a sniper for. The TUDR holds from a single Fortress, a single remaining piece of pre-break era. Fort Chemi. Here, in Chemi, I now sit, writing wounded. There are three other powers here on Titan now, all Post-Break. The Dark Legion, The Temï, and the Klasher's.

All three of them lay siege to us here in Fort Chemi daily, and because of this we must battle daily. Even though this, survivors come to be protected from the 3 other powers & bandit groups. We even have to print, build, and create a huge amount of ammunition to keep up with the fighting. We also have to build defenses & pieces of material to repair or grow our defenses to keep up this fight. Today, well it has been one of the biggest battles yet, with all 3 powers attacking at once, and not just fighting us, but each other.

At 5:00 the battle began with huge amounts of enemy mortar & tank fire. The East Wall had been hit most-heavyly, and by 7:30 the mighty armored units of the Dark Legion climbed the wall. At 8:00 I began to snipe.

I aimed my XT-74 Battle Sniper down at the coming army. I fired off rounds into their visors, breaking them & killing the armored legionies. I had to reload at 12-rounds. When I had reloaded, they had retaken the wall & fired grenades & RPGs down at the Heavy Tanks, Speedy Pikes, and Armored APCs of the Dark Legion before the Temi poured though the Legion at the wall. By 13:00 I had fired 324 rounds at the rushing armies. The Klashers had began to pour over the East Wall, into the Allied Defense-Trenches. After another 48 rounds, I had ran dry of ammo.

"FRICK!" I yelled "RETREAT TO THE INNER WALL"

I ran, abandoning my rifle. I watched at a Klasher space-fighter blasted apart my former sniping tower, knocking it over as I entered the Fort itself from the tower-bridge, which fell as I entered. I closed & Shut the Air-lock door behind me as Klasher rifle fire hit the area around it, and the door itself once it was closed. I heard Temï looting the dead & abandoned tanks, APCs, Pikes, and other things as they fought a few small battle with the invading Klasher force, trapping the Klashers in between The Fort's Outer Wall & its Inner Wall. Temï Warriors fought in hand-to-hand combat with Klasher Infantry just outside the areas of the Outer Eastern Wall. I watched as Forces on & around the Eastern sides of the North & South Walls fired down on the Klasher military forces, and the Klashers fired back.

But I was sure that the Dark Legion wouldn’t like the Klashers killing their troops... so where were they? I watched the skys as I heard their planes come over & drop in Legion Paratroopers.

Klasher Knights crashed close with the Paratroopers as they came down. As quicky as the Knights attacked they fell dead, their heavy armor useless against the shotguns, blades, and Grenades of teh Dark Legion Paratroopers. As Klasher Riflemen turned to support their Knights, they were meant with a wall of Carbine-Rounds & Shotgun shells. Klasher Shield-men only now stopped the Dark Legion‘s slaughter of the Riflemen, and some Knights when they created a shield wall. Over their Wall, Klasher Riflemen ripped at the Legion Paratroopers, now ducking, digging, & prying for cover. However, the shield wall let little protection from grenades, and when the grenades broke the wall, & Klasher Shield-men fell dead, I heard there final gunfire, as I could tell the Klasher where now retreating.

This is when I felt the Rifle hit my arm, and the blade cut my upper leg. As I fell over, sidearm in hand, firing, the Dark Legion Paratrooper kicked my Head, knocking me out cold.

It has been only 4 hours seen we finished the rebuilt of New Kansas City. 5 days since the fall of thr Dark Legion! 1 week since the last Klasher fell dead, and a Month Since the last Temï went to grounds! Titan has become rather peaceful, even with all the death we have faced for the last few years.

As the last human ship left the orbit, and the Pools of Lava bubbled over the last human Building, the highest point of the Tower of Eagle's, I watched. As sad as it may be, I am the stand human of Titan. I stand on top of the Mountain of McLindin, I write the final Tale of Titan; it's dear end ...

Let me take you back to 2083, March 3rd, Friday. The Day the Titan Drilling Coaliton Mined into the Tills Point. 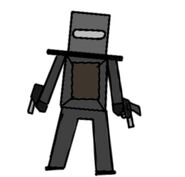 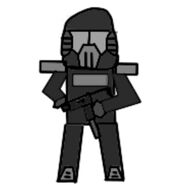 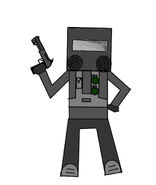 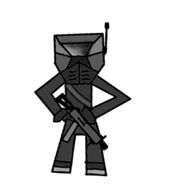 Retrieved from "https://authors-academy.fandom.com/wiki/Titan%27s_Short-Story_Hub?oldid=97207"
Community content is available under CC-BY-SA unless otherwise noted.